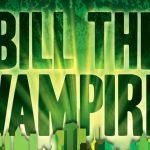 Bill The Vampire is hilarious!

I was not aware the “horror comedy” genre even existed and it ended up resonating tremendously. I suspect the genre as a whole would not work for me, but it works specifically in the context of our protagonist, Bill who is a huge nerd and remains so after being turned into a vampire.

Read it if you are a fellow uber nerd 🙂