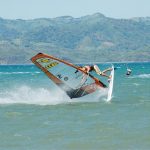 Ted Halstead, a friend of mine and president of the New America Foundation (www.newamerica.net), recently became addicted to kite surfing and convinced me to join him in Costa Rica for Thanksgiving to give it a try. I invited my cousin Cyril, my friend William, his wife Sophie, my dad and his girlfriend. We rented a local’s house on Playa Copal, in the northwest of Costa Rica (1 hour northwest of Liberia airport, west of La Cruz, next to EcoPlaya Hotel).

As we neared the location, after a final 20 minute drive on a bumpy dirt road, we were exposed to an amazing setting! The western orientation allowed us to see the most beautiful sunsets. We walked on beautiful and deserted white sand beaches, gazed at Nicaragua across the bay and encountered turtles, monkeys and iguanas during hikes. The house also came with it own fauna as we encountered scorpions in our rooms and tarantulas in the shower!

We met by a very international crowd of kite surfers from Australia, Austria, France, Germany, Switzerland and the U.S. Shockingly enough I had not seen as many BCG and McKinsey consultants in one place in a long time and our evenings were filled remaking the world and playing no limit Texas Holdem poker 🙂

Most importantly it was windy! I was told that from October to May there are 28 days of wind per month. The wind was not gusty and averaged around 20 knots – perfect for kite surfing!

It was humbling and fun to be a beginner all over again. I spent the first day learning to fly the kite and the second day trying to manage the kite with the board seemingly swallowing the entire Pacific Ocean in the process. As I needed moral support I enlisted the help of my cousin Cyril whose bumbling approach was endearing until he managed to step on a stingray and get stung by jellyfish!

After 2 days it magically clicked and we were finally able to get out of the water and actually kite surf! It’s an amazing sensation of gliding that appealed to the skier in me! In addition, playing with the elements gives you an engrossing sense of seeming power over nature (delusionally great for the ego 🙂 I am afraid to report that I am now addicted and will have to seek it out as often as I can. Kite surfing world, here I come!