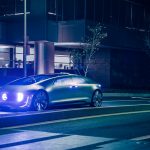 Ride-sharing is not killing car ownership

Imagine it’s the year 2035. Gasoline engines are a thing of the past—replaced by electric propulsion. Cars no longer feature steering wheels, thanks to tens of millions of lines of code doing the driving for you. And we’re led to believe that we’ll no longer own a vehicle; instead, we all ride in Ubers. If you believe what you read, then, car ownership will soon be dead.

But that won’t be the case.

To learn how, check out Beepi Chief Executive Officer Ale Resnik’s pointed Fortune Magazine piece, where he delves into the future of autos.