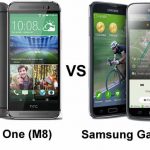 For the past year I have been the proud owner of a HTC One. As the new generation of phones emerged, it became time to re-evaluate my decision. I almost picked the HTC One M8. It’s clearly the better looking phone with a finely brushed aluminum body (vs. a generic plastic body for the S5). It has much better speakers. The HTC Sense interface is more streamlined and the HTC One M8 comes in a Google Play edition.

The Samsung Galaxy S5 has much better battery life, camera and is water resistant. Some might also point out that the battery on the S5 is swappable and that the screen is marginally better looking. However, I would never carry an extra battery in my pocket and both screens are gorgeous, so I felt those advantageous were de minimis.

I ended up weighing the pros and cons based on what matters more to me on a day to day basis. Based on my personal use, better battery life is paramount. With my old HTC One I could never finish the day without running out of battery. At the same time I take more photos with my smartphone than I listen to music without a headset. The waterproof feature is also a clear plus given my notorious clumsiness. Two years ago I broke 9 iPhones in 1 year (4 of which from water damage)!

Both are great phones and you can’t really go wrong with either, but the practical benefits of the S5 tipped the scale in its favor. I will revisit next year with the next generation of phones including the long awaited larger screen iPhone.