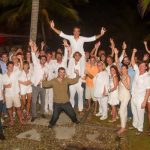 Like in 2013, I spent most of 2014 living with the consequences of the life changing decisions I made in late 2012 (2012: A Transition to New Beginnings!) of leaving OLX (Why I am leaving OLX) and radically simplifying my life (The Very Big Downgrade). However, with the benefit of 2013’s experience and repeated iteration, I started tweaking my life choices (Update on the Very Big Downgrade) culminating with the decision to partially rematerialize in 2015.

In 2014, I still traveled too much with frequent trips between Kiev, Bucharest, Zurich, London, Paris, Oslo, San Francisco, New York and Cabarete. It’s still nonetheless much improved from a flight duration and time difference perspective from the OLX days. Moreover, I was able to spend over a month in row in New York and Cabarete a few times. I now hope to both spend more consecutive days in New York, San Francisco and Cabarete, to travel less to Ukraine and Romania and to be able to spend more time in the same apartment or house.

Cabarete has successfully become the de-facto meeting place twice a year for all my friends and family – around my birthday in August and for New Year. To my horror, bewilderment and utter astonishment I turned 40 this year. While that is truly incomprehensible to me, I was surrounded by 40 friends and family and we had a blast. Spending time in Cabarete allowed me to continue playing sports with gusto, only tempered by a tendinitis and left knee injury late in the season. I went heli-skiing at Mica in January and continued to work on my kiting skills. I also went on a fun trip to the Galapagos with Otilia.

On a sad note, I bid farewell to Harvard, my beloved yellow lab and extraordinary ball of spastic insanity. On the professional side, Jose and I pursued a hybrid venture builder and investor model. We continued to support Beepi’s growth as the company is off to a great start and recently raised $60 million.

Unfortunately I am still waiting for the permits to start building out La Boca, my project in Cabarete. In the meantime, I built out a working space in the garage of the place I am renting (Silicon Cabarete MVP) and started moving some of my developers there from Argentina, Romania and Ukraine.

I also had the honor of being awarded the Pilier d’Or by the FIAF. I gave a fun interview on BFMTV, was covered in a beautifully written article in La Tribune and even gave my first interview in Spanish. On the investment side, we had our most active and successful year ever! We invested in 41 companies, including 24 marketplaces. We became stage agnostic. We now make series A, B and Pre-IPO investments in addition to seed investments. We had 17 exits, 10 failures and 7 successes including the IPO of Alibaba Group and LendingClub and our most successful exit to date from a multiple perspective with the sale of Brightroll to Yahoo.

Overall we’ve invested in 168 companies, 121 of which are still active. Those companies raised almost $1 billion in 2014!

My predictions for 2014 were by and large correct:

While the Internet sector is very frothy, we are not yet in bubble territory. Companies are growing faster than ever before, reaching billions in revenues in record time. We are living in a very unique time in history. We are seeing an unprecedented number of amazing companies being started by awesome people. We are coming across a plethora of extraordinarily creative ideas.

Jose and I don’t have a set number of companies we want to invest in. We just invest in whatever seems great. I suspect we will remain very active in 2015 as we are still seeing a record number of amazing deals. This will most likely be supported, in the US at least, but a very favorable macro-economic environment.

We are witnessing a shocking uncoupling of the US economy from that of the rest of the world. With a combination of decreases in oil and gas prices, productivity increases driven by the technology sector, and increases in spending by corporations and households as their balance sheets have been repaired, the US has once again become the engine of the world economy. This is in stark contrast with Europe which has entered deflation and where many countries are flirting with recession. Russia, Turkey and Brazil, not to mention Venezuela and Argentina, are doing poorly because of poor political decisions, economic mismanagement and the end of the commodities super-cycle. Chinese growth has also slowed down.

Barring black swans (e.g.; a Greek euro exit that causing credit markets to freeze as banks stop lending to each other because of the fear of counterparty risk with banks overly exposed to Greek debt), the US economy should continue to do well despite anemic global growth. As a continental power, exports are only 13% of GDP, limiting the impact of slower global growth. Unemployment is now at 5.9% and may fall below 5% by the end of the year. China is likely to do better than most pundits expect. Given the energy intensity of their economy, they are the greatest global benefiters of lower energy prices. This should allow them to lower interest rates to deal with the current credit crisis and to continue rebalancing their economy towards consumption.

In light of the benign inflationary environment and the fact we are entering a presidential election cycle, I suspect interest rates will remain lower than people expect, for longer than people expect. As such a lot of capital will be yield chasing which will lead to continued exuberance in the tech sector. This may eventually lead to a bubble and a day of reckoning, but I suspect it’s at least 100 basis points of interest rate increases away and 18 months away. In the meantime we’ll see great companies like Uber and Airbnb go public.

In terms of more personal predictions, I should rematerialize in 2015 by buying an apartment in NY. Construction will finally start on my La Boca project in Cabarete. Given the number of amazing companies in the portfolio: DeliveryHero, Palantir, Windeln, Ticketbis etc. I would be surprised if we did not have many more successful exits and IPOs.