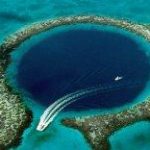 Belize: the next Costa Rica

Long known by scuba divers the world over for its coral reef, the second largest in the world, and for the blue hole, Belize is coming onto its own. Five hours from New York, with English as the primary language and the dollar essentially the local currency (the country has a fixed exchange rate – $1 USD = $2 Belize Dollars), it’s extremely convenient for American travelers from the East Coast or the South. When the airport runway gets extended in the coming years it will become even more accessible.

When visiting Belize, be sure to split the trip in two parts. Spend a few days in San Pedro, also called La Isla Bonita made famous by the Madonna song, the island off the coast of the mainland. Enjoy the richness of the marine life – swim with sharks and rays, sail, kite surf and jet ski. I will be the first admit that San Pedro is not extremely pretty – it’s barely one foot above water with small constructions everywhere – but it has its charm and the quality of the water is second to none! I recommend you stay at the Belize Yacht Club (http://www.belizeyachtclub.com/).

Then spend a few days in the Cayo district either at the Francis Ford Coppola estate or at Chaa Creek an eco-tourist lodge. From there you can explore Mayan ruins, kayak, hike, bike, canopee, explore caves and much much more! Be sure to stop at the Belize zoo on the way there or back.

In many ways Belize reminds me of Costa Rica 15 years ago when it was only known by adventure travelers. Since then Costa Rica has been fully developed – you can’t find a tract of land greater than 1,000 acres. That said Costa Rica has retained most of its charm and still ranks as one of my favorite destinations in the world.

In my last two trip to Belize, I became so enamored with the country that I considered buying a 100,000 acre tract of land there – a 15 mile by 13 mile property including 15 miles of beach front. I eventually decided to pass on the opportunity because it’s far from my core expertise and I am too busy with OLX to oversee the preservation and development of a property that size (managing park rangers, negotiating a tax deal with the government, etc.).

From the pictures of the first trip you can clearly see the sharks and a lot of the wildlife. Most impressive of all, after a 2 hour expedition inside a cave we saw Mayan vases and remains from human sacrifices in 900 AD! We were the 25th people in the cave and came just after a National Geographic Explorer team. From the pictures of the second trip you can see the amazing ruins of Caracol and the waterfalls of the Five Sisters lodge near the Francis Ford Coppola estate.

For full disclosure, I am an investor in Belize Yacht Club, Century 21 La Isla Bonita and in the Sands Villas 🙂