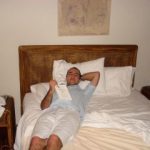 I was lured to Margarita and specifically the kite spot El Yaque by the kite boarding travel specialist Fun & Fly. It promised 360 days of wind out of 365.

Unfortunately the spot failed to deliver on its main promise. We were only able to kite 5 hours in the first 11 days. Fortunately, we were able to kite 5 hours on the 12th and final day. It rained every single day if only briefly. While the trip itself was inexpensive, food and local purchases were extremely expensive (above New York prices) as inflation increased many prices by 50-100% in the past year. The stay would also have been much more enjoyable if the room had hot water.

We intended to spend a few days in Los Roques or Tortuga as we had heard fantastic things about both locations but all the local flights were booked. We rented a boat and spent 2 days in Las Frailes, a small set of deserted islands near Margarita instead. The highlight of that trip came before we left as my cousin and I convinced our girlfriends we were going to sail the boat ourselves, share 1 small cabin for 4 people, eat the fish we caught which they would have to clean and prepare. Unfortunately the trip did not live up to expectations. There were no scuba tanks on board, contrarily to what we expected. There were no sand beaches on Las Frailes to walk on. There were not that many fish and corals to observe and the sea was covered by small jelly fish. Moreover, the boat rental was outrageously expensive!

The trip back to New York was a disaster. Santa Barbara Airlines closed its check in early and we missed our 6 am flight. They could not find our reservation in the system despite our printed eticket confirmations and took over 2 hours to issue our boarding passes. We could not pay airport taxes by credit card and the money exchangers did not allow the withdrawal of enough money to pay the airport taxes. We missed our connection in Miami and were put on standby for the flight to New York on American. The flight we ended up getting on in Miami was delayed 5 hours and they lost my suitcase!

On the bright side security was much better than we expected and did not notice any petty crimes. We did hear to avoid Caracas at all cost and dutifully obeyed. Should you come bring cash as you get two times the amount of Bolivars on the black market than at the official rate (and credit card transactions are at the official rate). Never get money at an ATM. Not only would the rate be at the official rate, but they would steal your PIN and take all the money out of your account.

Despite all of our travails, I had a good time given the charming company, witty conversation and relaxing atmosphere. Twelve days of doing nothing were exactly what I needed.


That said, I would recommend avoiding Margarita and will probably not come back to Venezuela other than to visit Los Roques.