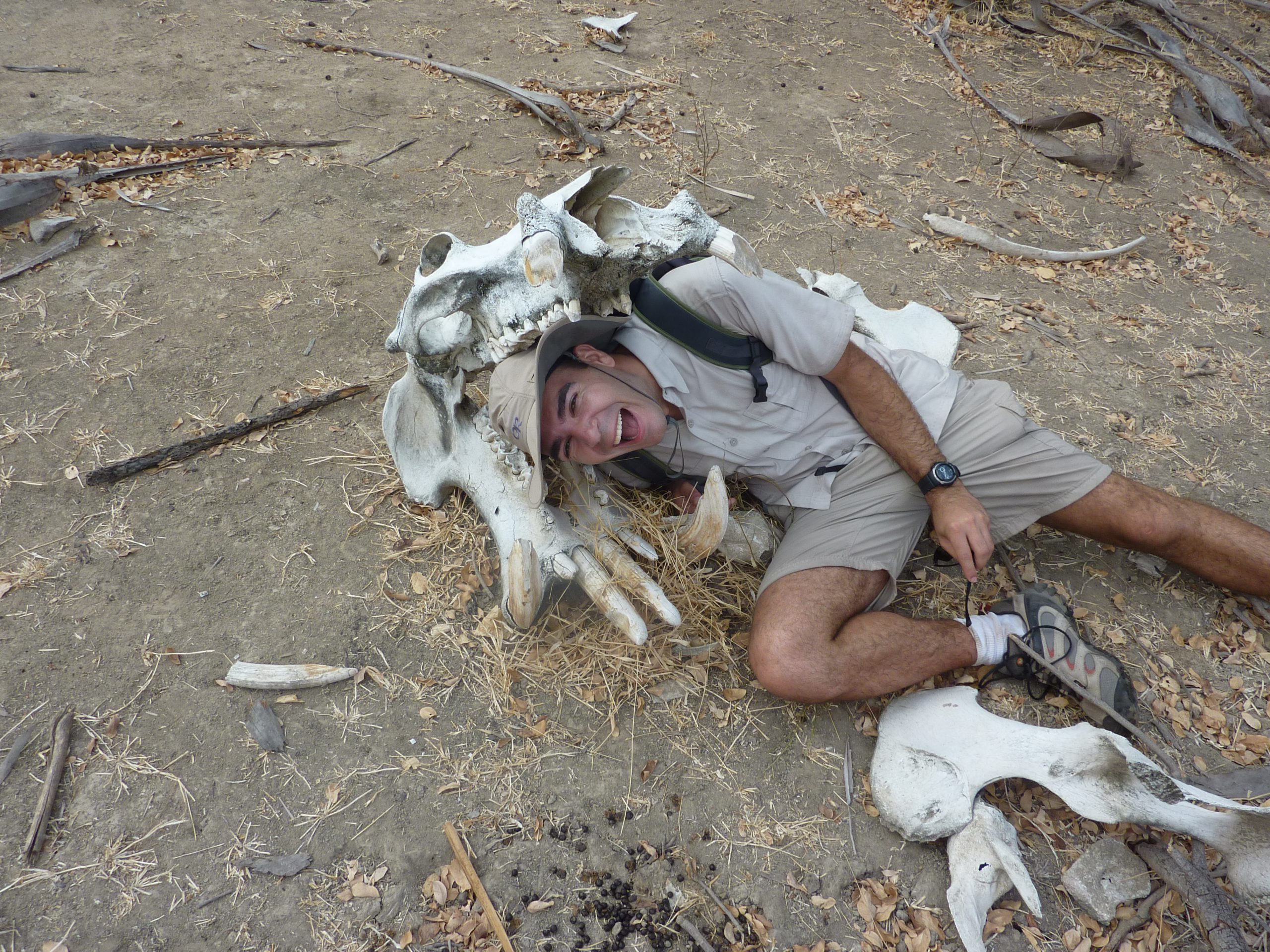 Ever since I read about Tanzania in National Geographic Adventure, I had wanted to go, especially as I had never been on a safari. I originally considered a 10 day walking safari in the Serengeti with Mark Thornton Safaris followed by a climb of the Kilimanjaro (not on the “Coca Cola route”). Mark Thornton Safaris provides an amazing experience as the walks are lead by a team of Maasai warriors, but ultimately, as my dad decided to join so much walking and climbing was inappropriate. As we considered our options, we were lucky that Mark Harrison, the CEO of Abraham Harrison, OLX’s fantastic PR agency had lived in Tanzania for a few years. He introduced us to Tanzania Odyssey and helped structure the trip for us.

We ended up selecting a mixed itinerary flying from Amsterdam to Dar es Salaam through Kilimanjaro. After one night in Dar, we flew to the Mwagusi safari lodge in Ruaha for a 4 day safari. From there we flew to Mahale on Lake Tanganyika where we stayed for 3 days chimping at Greystoke Mahale. Finally, we went on a 3 day walking safari organized by the Sand Rivers lodge in the Selous Game Reserve. All three areas had fundamentally different climates and provided very different experiences.

Ruaha
Ruaha National Park is in the middle of the country in an arid region whose landscape reminded me of Arizona and Nevada with desert like temperature variations: smoldering heat during the day to seemingly freezing cold at night.

We stayed in beautiful individual lodges. There was no cell phone reception, Internet or electricity, but the experience was all the better for it. The rooms had individual bathrooms, hot water in the morning and battery powered lamps at night. Meals were communal with the other guests. Dinners were truly exceptional as they were eaten in the open at a different location every night. For the game drives, we had our own car, driver and guide. The game drives would start at around 6 am. We would return for lunch at 11 am and start again in the afternoon from 4 pm to 6:30 pm. We read and relaxed during the breaks – you can’t see the animals from 11 am to 4 pm anyway as they stay hidden to protect themselves from the heat.

I had never been on a safari and was truly impressed by how close you could get to animals in open off-road vehicles. Wild animals are seemingly afraid of the strange bipedal beings we are, but unconcerned by the large mechanized vehicles we were traveling around in.

We were hopeful we would see many animals because the trip took place in late August during the dry season which provides the best opportunity for game watching. We were not disappointed! On our very first day, we chanced upon a beautiful 18 month old female leopard which was hunting dik-diks (very small antelopes). We had the privilege of being able to observe her patiently stake out her prey and discreetly crawl its way into hunting position. After observing her for 90 minutes we let her be to give her a better chance of reaching her objective. 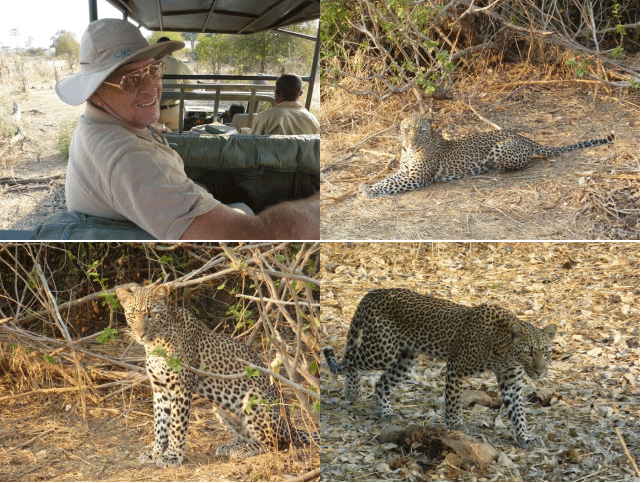 On the second day we encountered a large 500 animal strong herd of buffalo. As we soon learned, wherever there are buffalo, there are lions! A pride of lions is often found following buffalo herds preying on the weak, old and young. Again, we had the privilege of seeing lions prepare an attack while male buffalo prepared a defensive barrier to protect the herd. Another group saw the buffalo actively chase away the lions which were forced to retreat into the trees.

During the game drives we saw countless yellow baboons, giraffes, hippos, crocodiles, vultures, zebras and elephants. I loved watching the fish eagle royally stand on a branch observing the world around him before majestically flying and catching a fish.

One of the cutest moments of the trip took place on the third day. While driving along a dry river bed we encountered a large elephant herd. We learned that elephants can find water tens of kilometers away. They apparently knew there was water running below the river bed and used their front legs to dig a hole one to two feet deep. As the water seeped into the hole, they used their trunks to drink it. We saw two of the cutest baby elephants first trying to imitate their elders by attempting to dig a hole, then lying on their side for their short trunks to reach the water in the hole their elders had made.

The Ruaha trip part of the trip was the one where we saw the most diversity of animals, but after 4 days of sitting in open air vehicles we were looking forward to a more active lifestyle. It was time to leave the arid landscape of Ruaha for the lush tropical climate of Mahale.

The Mahale Mountains National Park is on the West Coast of Tanzania towering above Lake Tanganyika. Lake Tanganyika is one of the largest freshwater lakes by volume in the world: 670 km in length, 50 km in width with a depth of up to 1,470 meters! On the 90 minute boat ride to the Greystoke Mahale lodge it felt like we were navigating on an ocean. The ocean just happened to be made of freshwater and full of hippos and crocs!

After the arid climate of Ruaha with its drastic temperature contrasts, we welcomed the moist tropical climate of Mahale. We had individual bungalows which blended well into the forest. Mahale Mountains National Park houses some of Africa’s last remaining wild chimpanzees with a population of around 800 and the main attraction of Greystoke was the ability to go “chimping”. Every morning the guides would report where the troop of 60 nearby chimps were located and we would hike to them. Once we got close we had to wear masks to prevent potentially infecting them with the flu.

We would spend one hour observing them play, fight, eat and mate. It’s incredible how indifferent they were to us. They would pass by us oblivious to our presence only acting with other members of their group based on their position in the social hierarchy. We were also shocked by the similarity between their facial expressions and human facial expressions.

The rest of the day was spent relaxing on the beach, reading, hiking, playing Frisbee and kayaking before observing beautiful sunsets and dining on the beach with the other guests. It was the perfect way to relax after months of intense work. After three exquisitely relaxing days we took our leave and headed for the Selous Game Reserve.

The Selous Game Reserve is one of the largest fauna reserves in the world and is located to the south of Tanzania. It took the entire day of flying in the propeller plane to get there with 3 stops along the way, but it was well worth it. The walking (or “fly camping”) safari turned out to be the highlight of the trip.

very morning we would get up at 5:30 am, walk from 6 am to 11 am. We would rest for a few hours before hiking again from 4 pm to 6:30 pm. After a long day of walking in the sun, we would relax and eat a fireside dinner with our guide before sleeping in our tents. The experience was as authentic as it gets – the restrooms were essentially a shovel and showers were provided by gravity (an elevated bucket with a drip below it) – but safe and luxurious.

There was four support staff for the two of us: a cook, someone to assemble the tents and drive them to the next night’s location and two guides with guns. We each had our own guide as my dad was not up for hiking 7-8 hours per day. Our guides had guns to protect us. Interestingly enough lions and hyenas pose little threat as they are afraid of us. Buffalos, hippos and to a lesser extent elephants are the real danger as they sometimes charge humans.

Just as importantly, the trip, the long marches and the mid day pauses also allowed me to bond and connect with my dad in a way I had not in a long time. At the end of the trip, I felt closer to him than I had felt in years.

After three nights, we were happy to be taken to a lodge for a hot shower before flying back to Amsterdam, but already felt a tinge of the coming nostalgia for leaving behind such a beautiful wild environment. We had been touched in a unique way. I left knowing I would return to Africa: I long to see Victoria Falls, climb the Kilimanjaro and discover hidden wonders I am not yet aware of.

One thing is for sure: I will be back!