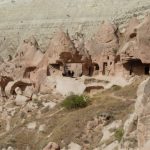 Last August, as part of a business trip, I spent a few days exploring Turkey. I had an amazing time. The country is beautiful with an extremely rich history, the food is great and the people are friendly!

In Istanbul we stayed at the Ciragan Palace Hotel which is a beautiful hotel on the Bosphorus. On Saturday we started at 9 am, drove to the Sultanahmet area to visit the Roman Hippodrome. It was built in the 2nd century AD by Septimus Severus and extended to its colossal dimension by Constantine the Great. Today it is adorned with historic monuments including an Egyptian Obelisk and a Serpentine Column. We then visited the Blue Mosque built between the years of 1609 and 1616 by Sultan Ahmet I. It is known as the Blue Mosque for its 20,000 hand made blue Iznik tiles that decorate its interior. From there, we went to the Hagia Sophia built by Justinian the Great in the 6th century AD. Today it is regarded as one of the seven wonders of the modern world. We then visited the Basilica Cistern, a beautiful piece of Byzantine engineering. It was largely emptied to allow visits and in the process discovered two amazing Medusa heads at the bottom of two of the pillars. After lunch at a local restaurant we went to the Topkapi Palace. Built in 1479 it was the center of the Ottoman Empire where the Sultans and their court lived, ruled, and governed for hundreds of years. We then went to the Spice Market built in 1660 as part of the New Mosque complex before returning to the hotel to relax by the pool. The next day we went on a tour of the Bosphorus on a private yacht. We got off in Bebek a lovely town on the Bosphorus and drove to Taksim, the center of today’s Istanbul which had a lively pedestrian street. We had lunch in a great local kebab house run by Kurds. From there we drove to the airport. On the way, we stopped by Pierre Loti’s House for tea. There we learned that Pierre Loti was a French writer who came to Constantinople as a navy officer in 1879 before falling in love with a local and with Istanbul. Today his former home is a very pleasant coffee house overlooking the Golden Horn area. We then caught a flight to Kayseri and drove to Cappadocia. We stayed at the Museum Hotel, an amazing cave hotel. We had to wake up at 4 am the next morning to take a balloon ride to watch the sunrise and fly over the entire region. We then spent the day exploring the Cappadocia region. We visited, Goreme the open air museum, hiked in Zelve Valley, met pottery and ceramic makers in Avanos, visited an onyx workshop and explored the Kaymakli Underground City before flying back to Istanbul. All it was an amazing experience that I would recommend to everyone! Both Istanbul and Cappadocia were exciting and interesting. Istanbul presented and amazing mix of the cosmopolitan energy of a city like New York with extraordinary historical richness! Cappadocia offered a beautiful panorama and rugged history with natural appeal!

I highly recommend using a guide – the experience is all the more enjoyable as you understand the historical significance of every monument. I highly recommend the guide I used – Mahir Pasha ([email protected]) – he is smart, extremely knowledgeable about everything, speaks perfect English and is well traveled.