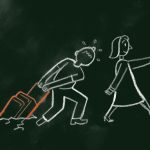 I just came across this amazing post by Christoph Niemann on the NY Times site at:
http://niemann.blogs.nytimes.com/2010/10/25/unpopular-science/

I reproduce it here for your viewing pleasure:

Whether we like it or not, human life is subject to the universal laws of physics.

My day, for example, starts with a demonstration of Newton’s First Law of Motion. It states, “Every body continues in its state of rest, or of uniform motion in a straight line…” “…unless it is compelled to change that state by forces impressed upon it.” Newton?s Cradle shows how energy travels through a series of objects.
In our particular arrangement, kinetic energy is ultimately converted into a compression of the forehead. The forehead can be uncrumpled by a downward movement of the jaw. Excessive mechanical strain will compromise the elasticity of most materials, though. The human body functions like a combustion engine. To produce energy, we need two things:
– Oxygen, supplied through the nostrils (once the toy car is removed, that is).
– Carbohydrates, which come in various forms (vanilla, chocolate, dulce de leche). By the by: I had an idea for a carb-neutral ice cream.
All you need is to freeze a pint of ice cream to -3706 F.
The energy it will take your system to bring the ice cream up to a digestible temperature is roughly 1,000 calories, neatly burning away all those carbohydrates from the fat and sugar.
The only snag is the Third Law of Thermodynamics, which says it’s impossible to go below -459 F.
Bummer. But back to Newton: he discovered that any two objects in the universe attract each other, and that this force is proportional to their mass.
The Earth is heavier than the Moon, and therefore attracts our bodies with a much greater force. This explains why an empty refrigerator administrates a much smaller gravitational pull than, say, one that?s stacked with 50 pounds of delicious leftovers. Great: that means we can blame the leftovers. (Fig. A): Let?s examine the behavior of particles in a closed container.
(Fig. B): The more particles we squeeze into the container, the testier they will become, especially if the container happens to be a rush-hour downtown local at 86th and Lex.
(Fig. C): Usually the particles will distribute evenly, unless there is a weird-looking puddle on the floor. The probability of finding a seat on the subway is inversely proportional to the number of people on the platform.
Even worse, the utter absence of people is 100 percent proportional to just having missed the train. To describe different phenomena, physicists use various units.
PASCALS, for example, measure the pressure applied to a certain area.
COULOMBS measure electric charge (that can occur if said area is a synthetic carpet)
DECIBELS measure the intensity of the trouble the physicist gets into because he didn?t take off his shoes first. Often those units are named after people to recognize historic contributions to their field of expertise. One NEWTON, for example, describes the force that is necessary to accelerate 1 kilogram of mass by one meter per second squared.
This is not to be confused with one NIEMANN, which describes the force necessary to make a three-year-old put on his shoes and jacket when we?re already late for kindergarten. Once the child is ready to go, I search for my keys. I start spinning around to scan my surroundings. This rotation exposes my head and all its contents to centrifugal forces, resulting in loss of hair and elongated eyeballs. That’s why I need to wear prescription glasses, which are yet another thing I constantly misplace. Obviously, the hair loss theory I just presented is bogus. Hair can?t be “lost.” Since Antoine Lavoisier, we all know that “matter can be neither created nor destroyed, though it can be rearranged,” which, sadly, it eventually will. Not everything can be explained through physics, though. I’ve spent years searching for a rational explanation for the weight of my wife?s luggage. There is none. It is just a cruel joke of nature