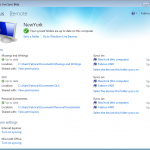 Given my itinerant lifestyle I end up working from many different computers. I was looking for a solution to move everything to the Cloud but only had imperfect solutions. Thanks to Microsoft Exchange I already have access to all my emails from any computer and many mobile devices. Carbonite gave me a good backup of all my files and remote access to them, but keeping files in sync between all my computers was always a pain. I would change some files in some folders at home, different files in the same folder at work and keeping it all straight was messy and complicated. I would use a mix of emailing myself the files and copying them on a USB stick, but it was manual, annoying and error prone.

I just installed Live Sync Beta and it’s amazing. It’s easy to setup and keep files in sync between many computers and on the cloud. Best of all it’s free! In the screenshot below you can see I setup syncing between my notebook and my work computer for three folders. If both computers are on, the sync is instantaneous. The software is not without flaws:

Hopefully those will be solved in the full product release. In the meantime, if you need to keep files in sync between multiple computers, you owe it to yourself to check out the free beta!

Partial non sequitur: It’s hard to believe Microsoft had a gem like this and I had never heard of it until Daniel Rasmus mentioned it to me over breakfast a week ago. I wonder what similar products are lost somewhere in the Microsoft matrix! I also wonder what weird Microsoft politics infected this project. It seems to have had many different owners over time given the many very different blogs on Sync/SkyDrive/Live Mesh within Microsoft (all of which have been discontinued except for the official Inside Windows Live blog). Also, the product used to be focused on syncing through the cloud when it was called Live Mesh instead of through peers. I hope it becomes the focus again soon!