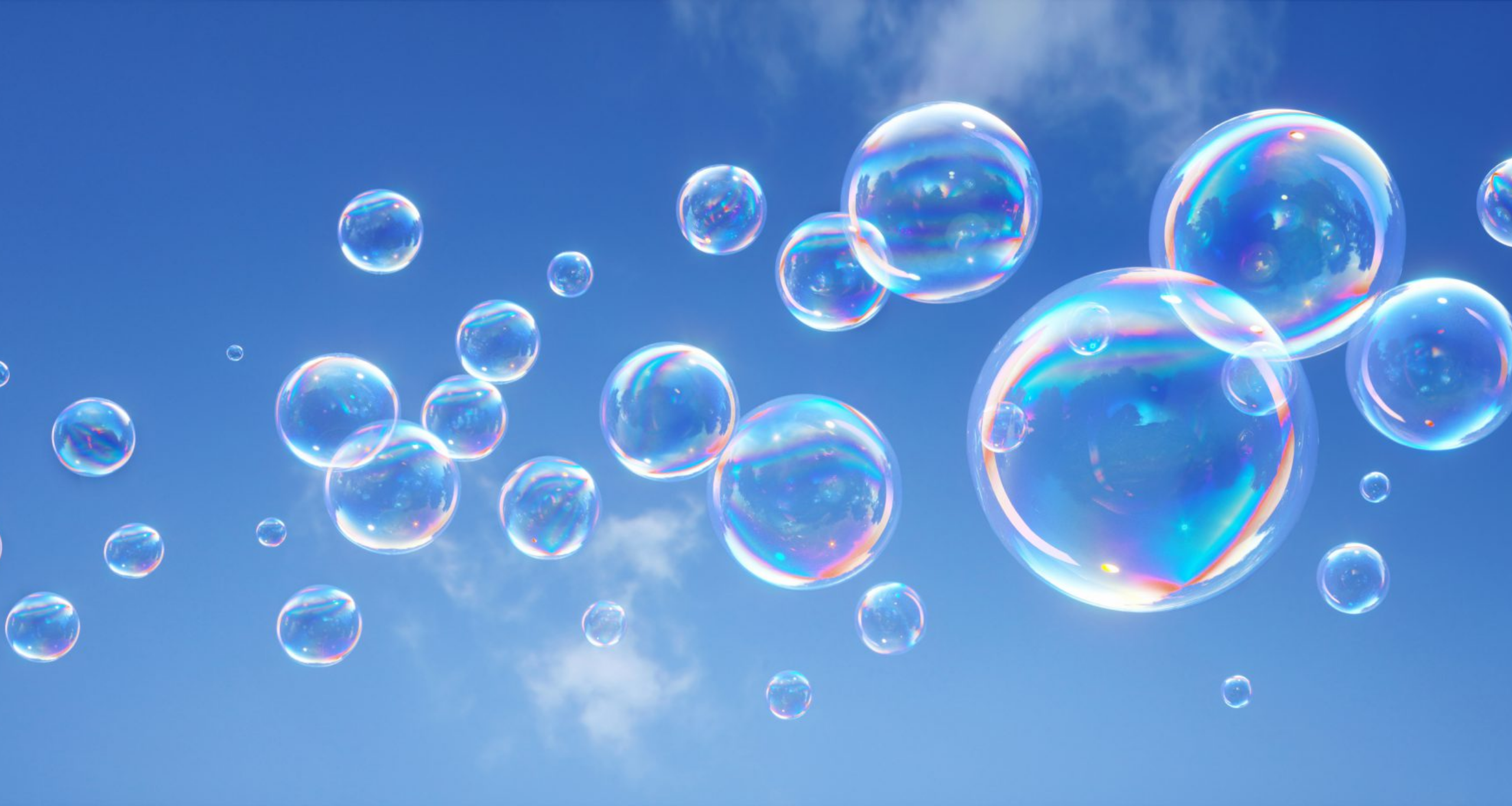 Welcome to the Everything Bubble!

The warning signs of market mania are everywhere. P/E ratios are high and climbing. Bitcoin rose 300% in a year. There is a deluge of SPAC IPOs. Real estate prices are rapidly rising outside of dense major cities.

These, along with retail-driven short squeezes, mini-bubbles and increased volatility are symptoms of a bubble.

At first glance, the fact that we are in a bubble might seem surprising with millions unemployed or underemployed. However, during the pandemic, personal income rose by over a trillion dollars due to historic levels of government fiscal stimulus.

Wages only dropped $43 billion March to November. While many low-end service workers lost their jobs, higher paying professional jobs were unaffected, and some low skilled jobs boomed such as warehousing and grocery stores, leading to lower losses than might have been anticipated.

The scale of the government support programs was unprecedented. Unemployment insurance programs pumped $499 billion into Americans pockets. The $1,200 stimulus checks to most American households added another $276 billion. All in all, Americans had over $1 trillion more after-tax income March-November 2020, than in 2019. As a result, US bankruptcy filings hit a 35 year low in 2020!

On top of that, discretionary spending fell dramatically. Services spending fell by $575 billion as people did not go on vacation, to restaurants, movie theaters, sports venues, concerts etc. While Americans spent a bit more on durable goods, overall spending still fell by $535 billion.

When combined with the increase in personal income, Americans saved an extra $1.5 trillion!

While part of that extra cash went into deposits, a lot of it also went into investing, inflating asset prices. This comes on top of the flood of liquidity unleashed by the Federal Reserve and its commitment to keep rates near zero- in fact real rates are now below zero.

The value of asset prices should be the net present value of their discounted future cash flows.

Interest rates near 0 can justify much higher valuations. If you believe that rates are now going to stay near 0 forever, the current valuations are in fact reasonable. I, for one, do not believe that to be the case considering most global governments are suffering from deteriorating fiscal positions from unsustainable growth in deficits and debt.

A day of reckoning is coming, but it may not be as soon as I fretted in my year end update. I suspect that I cried wolf too soon. The world will remain more preoccupied with fighting COVID than the consequences of the increase in government debt for the foreseeable future. On top that expected increases in both private and public spending should further boost the economy.

The US savings rate has been around 7% for most of the past decade. While it declined from its 33% peak in April, it is still around 13%. I suspect that once COVID is behind us, there will be the party to end all parties. People are going to travel, party and spend like there is no tomorrow. If the savings rate returns to its ex-ante level of 7% that will mean an extra $1.2 trillion in spending. On top that there is another $1.9 trillion stimulus package which likely includes $1,400 in direct payments further pouring fuel on the fire.

In other words, I think we have a way to go before this bubble pops. During the tech bubble, I was writing it was obvious we were in a bubble years before it popped. Likewise, during the real estate bubble I warned all my friends away from buying real estate starting in 2004. Given the circumstances, we are more likely in 1998 or 1999 than February 2000.

How will this all end?

However, trouble is brewing considering all the government and corporate debt overhand from COVID. There are several ways out of this.

This is not unprecedented. During WW1 and WW2 government debt ballooned. However, after both wars, there was strong economic growth coming from strong consumer demand and strong investment. It may happen again. After a few decades of productivity growth stagnation, we may be on the verge of a productivity boom. COVID has led to a massive increase in adoption in digital payments, telemedicine, industrial automation, online education, ecommerce, and remote work. On top of that the speed of the development of mRNA vaccines gives hope that a lot more innovation is in the cards in healthcare.

The US is also clearly trying to increase nominal inflation to keep real rates negative which helps the government deleverage, as it did after World War 2. Real rates are now negative again.

Given the size of the stimulus and the expected increase in demand, I suspect they will succeed in pushing nominal inflation above 2% as the Fed is targeting.

Note that such an outcome is not always guaranteed. Japan failed to create inflation for most of the past 30 years despite massive government spending and quantitative easing. You can also overshoot and create high inflation as Zimbabwe highlighted in the last two decades.

Controlled inflation in the 2-3% range would be the ideal outcome.

After both world wars, there was a strong social and political consensus in favor of budgetary restraint and debt reduction.

Likewise, Greece was forced to run surpluses and mend its profligate ways as part of the bailout conditions.

My perspective on what will happen

The US no longer has the discipline to run surpluses, but can keep sustaining deficits as long as the dollar remains the global reserve currency. The day of reckoning will come but does not seem to be in the cards in the near term, so the US debt will keep ballooning.

For a while I fretted that the next financial crisis would take the form of a sovereign debt crisis in a major economy as investors feared it could no longer afford its debt level, as happened in Greece a decade ago. Italy, with its debt to GDP ratio set to exceed 150% in 2021, came to mind.

I am no longer sure that is the highest probability scenario. The euro crisis showed Europe was willing to do anything to anything to preserve the euro and I expect this time to be no different. While there might be a sovereign debt crisis, we would probably find a way to muddle our way out of it.

As a result, I wonder if instead the next crisis will not come as a crisis of faith, but in fiat currencies writ large. I do not see this happening in the next year or so. However, there will be a day of reckoning given the ever-expanding money supply combined with unsustainable growth in debt and deficits in almost every major country in the world.

What to do as individuals living through this bubble?

It is unclear why and when the bubble will burst, but there are a few ways to be ready for when it bursts.

First, in this environment you should own no bonds whatsoever. Yields are insanely low, and you are not being compensated for default risk. At the same time, you are at risk of inflation.

Second, I would increase dramatically your cash holdings to 20% or more of your assets.  You are not earning anything on that cash, and you lose the inflation value. On top of that it would be debased in a fiat currency crisis. However, having liquidity is useful in other types of crisis where people take a flight to safety when bubbles burst. It provides safety, flexibility, and allows you to buy assets cheaply. At the same time, you can move out of cash, if necessary, should inflation spike.

Third, avoid margin like the plague. While inflation decreases the value of your debt (and mortgages are ok), you do not want to be exposed to margin calls when the bubble bursts and assets decrease in value. Many wealthy people went bankrupt that way during the financial crisis of 2007-2008.

Fourth, own high-quality stocks. They increase in value in an inflationary environment and retain more value when asset prices fall. In other words, do not suffer from FOMO and pursue the latest investment craze (Bitcoin, Gamestop etc.). This is not to say you should necessarily sell your Bitcoin if you own some. It is a form of digital gold that could be a good inflation hedge, but I would not be looking to add to my position at the current price levels.

You should not try to short the bubble because as Keynes said: “the markets can remain irrational longer than you can remain solvent”. A better way to play the bubble is to create assets like a tech startup or a SPAC.

Note that in my case I do not even own stocks. I have a barbell strategy with only cash and early illiquid privately held tech startups. If you have enough diversification (meaning over 100 investments) to account for the startups that fail, private early-stage tech startups are the best asset class. They create value for the economy and can grow rapidly. As such they are amazing to own in both inflationary and deflationary environments.

Note that I strongly vary the balance of my assets between cash and startups. Sometimes I am all in startups. Sometimes I keep large cash reserves. Right now, I am building my cash reserves while still investing. I particularly like the arbitrage of selling overvalued public tech stocks (or pre-IPO companies) and investing in somewhat less overvalued early-stage tech startups. However, I suspect having large cash reserves will come in handy at some point in the next few years.