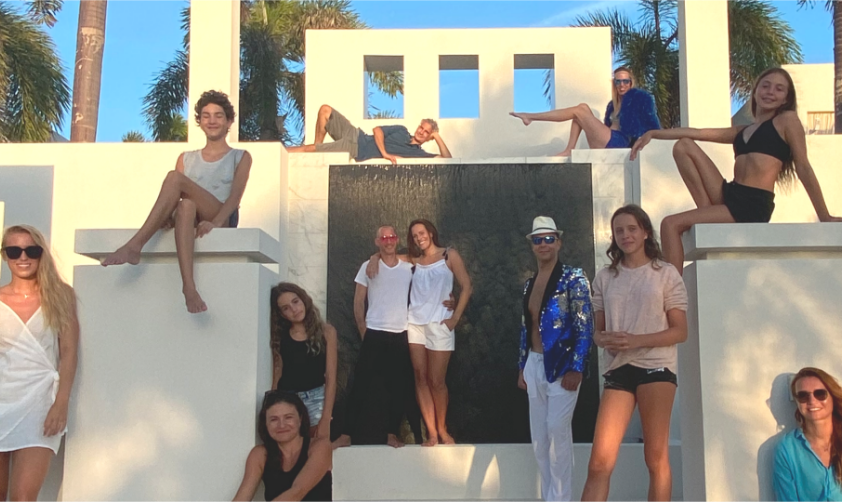 The best-laid plans of mice and men often go awry. As you may recall, I ended 2019 intent on selling my New York apartment and renting an apartment March 2020 onwards. The idea was to live a hybrid life where I split my time between New York and Turks & Caicos.

I wanted to spend every other month in New York intellectually, socially, professionally and artistically stimulated beyond my wildest dreams, meeting countless extraordinary people, hosting intellectual dialoging salons and enjoying all of New York’s entertainment options. Then I wanted to head to Turks & Caicos to work during the day, kite, and play tennis, and really take the time to read, be reflective and recharge my batteries.

As you might suspect, the year played out rather differently. The year started out as expected. I went heliskiing in Canada. I went to the fantastic Upfront Summit in LA. I hosted FJ Labs’ bi-annual brainstorming retreat at my place in Turks & Caicos. I went to check out the gorgeous Sanctuary in Utah. I had been inspired by their manifesto and jumped at the opportunity to experience it firsthand. I love their vision and they built the most beautiful contemporary chalets I have ever seen. However, it helped me realize that ultimately Revelstoke in Canada pulls at my heart strings and would make a better winter base as the mecca of extreme winter sports with its renowned steep and deep tree skiing. Not that I have decided to implement that vision yet, but it is nice to dream.

As February wore on, I started pondering the potential impact of COVID-19. I wrote an article in February suggesting COVID-19 could be the black swan causing the next global recession. I sent a message to my friends in early March telling them that staying in a high-density city like New York during a pandemic made no sense. I invited them to join me in Turks & Caicos. Eleven of them responded to the call. We became a pandemic family.

We were quite the motley crew as we were the random assortment of the first eleven people who decided to join me. I had distributed the invitation widely so many of us did not know each other that well before quarantine. We were all in different stages of life including 4 kids ages 12 through 14.

Despite being the most unexpected of groups, I could not have hoped for a better outcome. We all took turns doing tasks in the house and brought our varied skills, passions and energies to bear. We also realized how privileged we were to both have each other at a moment during which many were isolated and alone, and to have the opportunity to enjoy the outdoors and practice sports or find alone time when most could not leave their homes.

It was a really nice change of pace not to travel for five and a half months and lead a more domestic existence. Like most people, I typically only do important or urgent things on my to do list, but rarely get to the “nice to do”. With urban life on hold, I took advantage of the opportunity to tackle those. I redesigned my blog. I redid the website of my villa in Turks and took control of its marketing such that most rentals now come directly rather than through Luxury Retreats. I started a live streaming show, Playing With Unicorns, to share everything I wish I knew when I started out as an entrepreneur. I read and wrote more than ever before. I improved at kiting. I built the first padel court in Turks and Caicos and spent countless hours practicing.

Come late August, I was itching for a change. I decided to go camping in Yellowstone. It was a fun weeklong trip off grid with no cell reception where you carry everything you need including your tent, sleeping bag and food in your bag pack as you go from camp site to camp site. It was gorgeous and refreshing. A freak August snowstorm reminded me that the best stories are born of adversity. It was a great complement for a trip to the Aman in Jackson Hole.

In the fall, I also went camping on Governor’s Island, went to see the foliage change in Lake Placid, and reconnected with the FJ Labs team in New York.

I was also able to bring my extended family together for the holidays. It is something my grandmother Francoise used to do yearly. However, it is a family tradition that had dissipated since she passed. With the help of my cousin Nalle, I was delighted to be able to restart the tradition. We were especially lucky to be able to get together in Covid times when many are separated from their families. We all got PCR tested before spending 19 days together in Turks & Caicos and were able to stay safe while having an amazing time. I was elated to be able to spend time with my parents, cousins, brothers and uncle for the first time in over a year!

FJ Labs continued to rock. 2020 was our most prolific year ever. The team grew to 28 people. We deployed $57M. We made 146 investments, 97 first time investments and 49 follow-on investments. We had 27 exits, of which 15 were successful including the IPOs of Wish and Airbnb, the IPO of OpenDoor via SPAC, the IPOs of Meliuz and Enjoei on Brazil’s B3 exchange, the acquisition of Postmates by Uber and the acquisition of Fanduel by Flutter Entertainment.

Since Jose and I started angel investing 22 years ago, we invested in 655 unique companies, had 218 exits (including partial exits where we more than recouped our cost basis), and currently have 603 active investments. We had realized returns of 61% IRR and a 4.8x average multiple. In total we deployed $320M of which $120M was provided by Jose and me.

I came to realize that my willingness to participate in panels or give keynote speeches grows dramatically if I do not need to travel for them and I gave more speeches and appeared on more podcasts than ever before. To avoid redundancy, I tried to cover different topics and content and ultimately used a lot of this content for various Playing with Unicorns episodes including FJ Labs’ Investment Thesis and FJ Labs’ Startup Studio Model.

The keynote I am most proud of and did the most research on is my case for technology-led optimism despite the pandemic, populism, climate change, policy failure, social unrest and social injustice. It is worth watching in full and I am including the slides below for your reference.


Most of my writing was professional in nature this year largely driven by all the content I needed to create for Playing With Unicorns. My best blog posts were:

I continued to be a very prolific reader in 2020. It is probably worth mentioning that most of what I read is fiction and most of that is science fiction though I dabble in every genre. My favorite non-fiction books of 2020 were:

In general, I do not read “business books” as I find them simplistic. Loonshots is the exception to that rule. It blew me away. It mixes compelling personal narratives of entrepreneurs like Edwin Land (Polaroid) and Juan Trippe (Pan Am) with observations from physics and history to weave a very compelling narrative. I also had the pleasure of having its author, Safi Bahcall, on Playing With Unicorns for a fun and wide ranging conversation.

From a macroeconomic perspective, COVID-19 brought the longest expansion on record to a screeching halt with the lockdown leading to levels of unemployment and economic contraction not seen since the Great Depression. As I predicted, the second order economic impact of the pandemic was more damaging than the first order costs of treating infected people or lost wages from people not working because they are sick. Also as predicted, governments and central banks threw everything including the kitchen sink at this problem.

Given the curtailing of economic activity due to restrictions, the greater short-term risk is deflationary. In the near term historically low interest rates are making the record levels of debt manageable. However, the massive debt overhang will require delicate macroeconomic management to avoid a massive financial crisis.

Record low interest rates are also fueling asset price inflation across most asset classes and a full-on bubble in SPACs. Outside of commercial and residential real estate in major cities, it feels like we are in the late stages of a low interest rate fueled “everything bubble” with extreme frothiness across most asset classes. It may very well continue for a while as there is increasing optimism about the end of the pandemic. However, at some point the harsh reality of weak underlying economic conditions may very well temper today’s frothiness and excessive valuations. I will not be so foolish as to pretend I can predict when the bubble will pop, but I would not be surprised if it happened in 2021.

Historically crisis have accelerated underlying trends and been a source of innovation. The 1930s saw the greatest increase in productivity growth in the US as necessity is the mother of invention. Likewise, the most defining companies of the last decade, Airbnb, Cloudflare, Github, Pinterest, Slack, Square, Stripe, Uber and Whatsapp, were founded during the financial crisis of 2008-2009. Uber and Airbnb grew dramatically as individuals’ personal financial difficulties led them to consider renting their apartment to strangers or becoming part time drivers for the first time.

The most interesting companies of the coming decade will likely have been created or come of age in COVID times. This past year has seen a rapid increase in online adoption across most categories. Some sectors such as online food and grocery delivery, telemedicine, online education, and remote work exploded, while others such as ecommerce, online gaming and video grew significantly from already large bases.

Given that online experiences are more convenient and less expensive than the alternative, this increase is here to stay. While some sectors might give back a bit of the growth, in general, there has been a step change in penetration, and they will grow from this increased base.

I am extremely grateful for the year I had, surrounded by loved ones in a safe place and privileged to be able to work remotely in a sector that has benefited from COVID. I am excited that human ingenuity led to the creation of a new class of vaccines in record time. I am hopeful that by the second half of the year we will be able to return to a semblance of normality and put an end to the personal and economic suffering this crisis has caused.