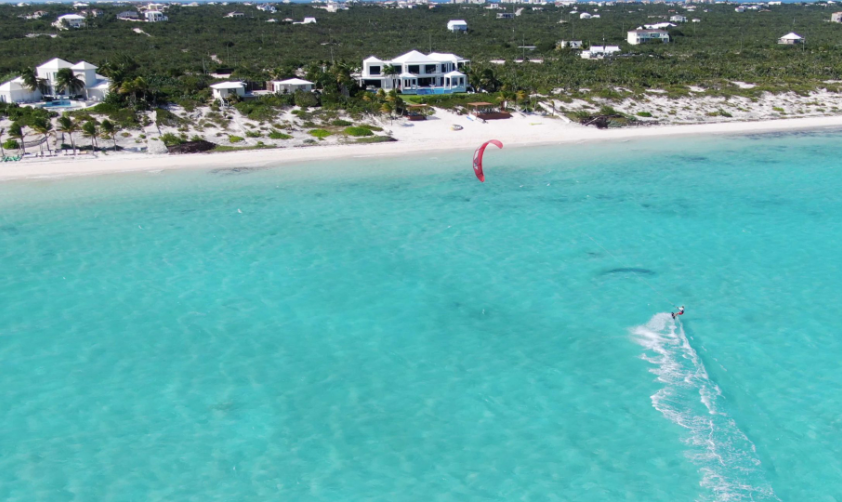 In 2019 I moved to Turks & Caicos and decided to sell my apartment in New York. I love my hybrid life where I split my time between New York and the Caribbean. It allows me to spend a month in New York where I am intellectually, socially, professionally and artistically stimulated beyond my wildest dreams. I meet countless extraordinary people, host intellectual dialoging salons and enjoy all of New York’s entertainment options. But after a month, I admit I am exhausted, and the constant doing takes time away from thinking. That’s why I then love spending a month in the Caribbean where I can work during the day, kite, and play tennis and really take the time to read, be reflective and recharge my batteries.

I decided to leave the Dominican Republic in 2018, and had to ponder where I should go. My real estate travails from 2012 to 2018 meant that for 7 years I did not have a real home or the playground with all the activities I adore. It’s not as though those are life essentials and I was deprived. Quite the contrary, I had amazing life experiences in asset light living (see The Very Big Downgrade & Update on the Very Big Downgrade). I traveled extensively and went on many adventures, but I must admit I do miss the convenience of being able to play tennis and padel every day or just to have my friends come over for a LAN party.

In hindsight, I should have just bought an already built house that I could just move in, in a stable country where I could buy inexpensive nearby land to build my playground and call it a day. It would not fulfill my grandiose vision of building a “Necker Island 2.0” to invite a community of entrepreneurs, artists, spiritual leaders and intellectuals to hang out, nor would it have my specific aesthetic preferences, but it would have the convenience of being immediately useful and to play the role of gathering point for friends, family and colleagues.

This led me to buy Triton in Turks & Caicos. Turks is very built out and does not have the raw authenticity of Cabarete. There are fewer days of wind for kiting, and it’s insanely expensive. However, it has the most beautiful water in the world. The weather is fantastic all year long. The flights are only three hours from New York. It’s English speaking and uses the dollar as its currency. The safety, flat water and gorgeous beaches, not to mention the absence of Zika, Chikungunya and dengue make it appealing for all my friends and their families, and not just my adventurous friends who liked the rougher conditions of my Cabarete dwelling with its massive spiders, rats and cockroaches.

Having gleaned some lessons from my prior experiences, I decided to buy a house on Providenciales on Long Bay Beach where I can kite directly from the house and play tennis at the house. I opted not to buy on the other islands despite significantly lower prices and the availability of more land, because the lack of infrastructure makes things way more complicated and expensive. It’s also inconvenient to go for a few days if upon landing you need to be driven to a boat to get to your destination. I will now buy a little bit of inexpensive non-beachfront property to build the missing elements of my playground starting with the all-important padel court.

At the same time the never-ending travails with my New York apartment made me decide that the time had come to move on. In 5 years, I have not been able to enjoy the apartment properly and the water damage has been such that I have been living in hotels and Airbnbs for the last 18 months. As the building is badly built, the management intractable and the building broke, I suspect that even if I ended up rebuilding it as my dream apartment, problems would keep popping up. In hindsight, I undervalued the benefit of being in a well-managed building with the financial means to address issues, nor did I realize the downside of having by far the best apartment in an otherwise relatively small and poor building. Having moved dozens of times in the last 18 months, I intend to rent an apartment March 2020 onwards.

These travails have also cured me of home ownership. I would much rather rent and have the owner deal with whatever issues arise rather than having to deal with them myself. It means I won’t have the apartment of my dreams, but as life keeps highlighting: the best is the enemy of the good. I look forward to having a place in New York I can call home for the next few years bringing a modicum of stability to my life.

I keep being surprised by the amount of work and costs involved with real estate ownership and how illiquid an asset class it really is. The maintenance required highlights that it is a depreciating asset that requires constant work. When you take into consideration property taxes, insurance, maintenance and the constant renovations, the net yield is negligible. Despite historically low interest rates it makes much more sense to rent. This is especially true in New York right now as the glut of high-end apartments makes it a renter’s market. I can’t wait to be rid of all the real estate I own, though the pace of divestiture has been glacial.

Having found my new home in Turks, allowed me to have an amazing year on both the personal and professional fronts. I brought my friends and family to visit countless times. I started learning to kite foil and had countless adventures.

I also spent time visiting my family in Nice. It felt amazing to be back in my hometown enjoying the amazing food, playing tons of padel and spending time with my nephew.

Since our inception, we invested in 558 unique companies, had 191 exits (including partial exits where we more than recouped our cost basis), and currently have 484 active investments. We’ve had realized returns of 62% IRR and a 4.4x average multiple.

I spent some time thinking about the latest trends in marketplaces.


I also shared a lot of my entrepreneurial lessons learned in a series of keynotes, fireside chats, podcasts and video interviews:

It was fun to get a full page in the local newspaper just as I came to visit my family in Nice and to be covered in Les Echos around the French Tech conference.

In terms of writing, I finished my framework for making important decisions in life:

I also reviewed Why We Sleep given that I made significant life changes post reading the book and wrote a packing list for Burning Man to help virgins and grizzled veterans alike.

My economic predictions for 2019 were correct: the US economy did well. We are now in the longest expansion on record, and tech remained the sector to be in. While we are late in the economic cycle, the US may very well continue to do well until the end of 2020. We are at full employment and presidential election years typically have loose fiscal and monetary policies.

The main recession risk seems geopolitical given the current slew of world “leaders.” I suspect that the largest risk to the world economy is a budget crisis in Italy. It would put the Euro project at risk and lead to a massive flight to safety, creating the next global recession.

The current political climate keeps reinforcing my decision to avoid following and reading news be it in newspapers, online or on TV. It’s sensationalist negative entertainment that misses the real technology-led improvements that happen slowly, but inexorably transform our lives for the better.

Despite the implosion of WeWork and the travails at Softbank, I remain very bullish on early stage venture capital. We are still at the very beginning of the technology revolution. Only 15% of commerce is online. Online penetration remains negligible in the sectors that account for most of GDP: education, health care, and public services. The way we build homes is still artisanal. Synthetic biology is in its infancy. The emerging trend of no-code, which allows non-programmers to build complex fully functional websites, is unleashing a massive wave of innovation. It democratizes startup creation and innovation allowing people from all walks of life and every educational background to partake in the Internet revolution.

We are meeting more extraordinary entrepreneurs than ever before. There are still billions of capital on the sidelines in later stage funds like Sequoia and Insight that need to be put to work in the next few years. I suspect that even if some of these funds disappoint, most will still be able to raise their next fund. The current low rate environment, with no end in sight, will continue to lead to yield chasing. All that to say Seed and Series A funded startups will have access to plenty of capital. The technology sector remains the engine of productivity and economic growth and will continue to do well in 2020.