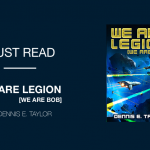 The Bobiverse book series is tons of fun!

After my strong recommendations for Ready Player One, Star Force and Old Man’s War, it’s probably obvious to most than I am a big fan of sci fi and of space operas in general.

The Bobiverse series is an innovative take on the genre. The series centers on Bob, a nerdy successful tech entrepreneur who signs a contract to cryo-store his head in the event of his death. He dies shortly thereafter in a traffic accident. He is woken up a century later, but he’s been turn into AI with the objective of turning him into a von Neumann probe.

From his travails on earth to his exploration of the universe and shepherd of human life, the story is well told, well-plotted, fast paced and fascinating. The tone is witty, thoughtful and introspective. The book is tons of fun even when it ponders philosophical questions.

The book really resonated as I could recognize myself in Bob and his clones. I also appreciated the constant struggle throughout the series between the issues in front of you and other goals. To tread lightly, the Bobs constantly must decide between helping the humans with their latest crisis and heading out to explore the galaxy. Of course, it’s not a binary decision, but it has parallels to innumerable other situations. Fellow nerds will also love all the references to Star Trek, Star Wars and countless cult classic movies of the last 30 years.