Even when I was little I knew I wanted a dog, preferably a Labrador. I remember begging my parents to get one. They finally saw the wisdom of my request and Ucla joined our family. For 16 years, he was a constant fixture in my life with his wonderful almond eyes and insatiable thirst for life. Despite lacking proper training, he always instinctively knew what to do. He always ran to the right of my bicycle on open roads going exactly at my speed. We played a game where I had to steal a ball from him through whatever means possible for us to play fetch. Should I fail in my attempts, he would start putting the ball on the side of his mouth to make it easier for me to steal it from him. We had a blast! 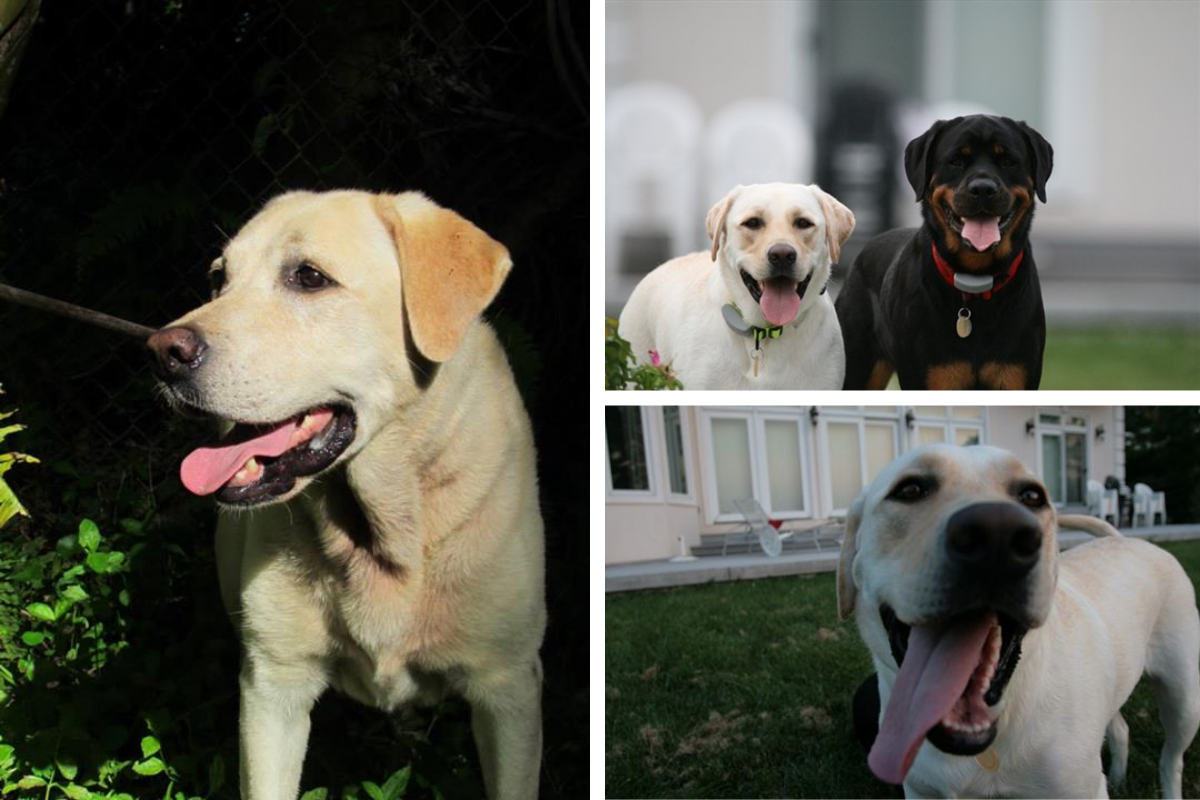 Once you have been blessed by the love and companionship of a dog, you can’t quite imagine living life without it. I pined for a new Labrador for years. However, I knew it would be unfair to the dog and to me should I get him while living in a tiny apartment in NY while completely overworked from McKinsey or whatever startup I was running. I bided my time. Finally, post selling Zingy I could afford to have a country house with a big garden and could indulge my childhood dream!

My girlfriend wanted a Rottweiler so we wisely compromised and got both! She looked for breeders, read books on how to select amongst all the puppies, while I was tasked with rolling around the mud and playing with them. I can’t tell you how adorable Rottweiler and Labrador puppies are. It’s a miracle we ended up with only two dogs! Harvard was born on March 2, 2005 and I first met him 5 weeks after that. He was so white he had been nicknamed “snowball”. I have to admit that he was not the puppy we picked. When we came back 2 weeks later to get our dog, he was the only one left. We had driven all this way and he was just too cute not to take home. And thus Harvard entered my life. My father had named my first Labrador Ucla because it was supposedly the year of the “U” in dog names and he had done his MBA at UCLA. Having gone to Princeton, I thought it would be funny if my lab was called Harvard and was at my beck and call. Little did I realize he was going to be a spastic ball of manic insanity who really should have been named “No!” Over the years, I can’t recount the number of times I said: “Harvard, no! No, no, noooooooooo…“ as some disaster would inevitably ensue.

As loving and cute as he was, he sure had personality. He always had a knack for doing the stupidest thing he could do at any given point in time. Above all, he was a mischievous glutton, definitely not above using his guile, charm, good looks and every other trick in the book to get food. He had a special knack from identifying weak links, especially kids and newcomers who would underestimate his speed and agility. I can state with certainty that no other dog can steal the food on someone’s plate as fast as he could. He would patiently wait for my guests to look away from their meal, and in the blink of an eye, he would emerge from under the table and empty their plate with the speed and precision of a ninja crossed with an alligator.

With regards to food, he was insatiable. Fruits, vegetables, meat, fish and everything in between. He was the ultimate omnivore, always happy to sample everything. Every day he would go into my shower, pondering whether to eat the soap. He would give it a lick and decide it was not for him. Inevitably he would return the next day, just in case the soap had gotten tastier overnight, to give it another try. Years later, he finally bit the bullet and ate it. Knowing him he might have even enjoyed it!

It’s hard to imagine how different he was from Bagheera. As poised, elegant, calm and loving as she is, he was always bumbling and clumsy yet providing his own form of adorable aggressive love – kissing you while head butting you and lying all over you. 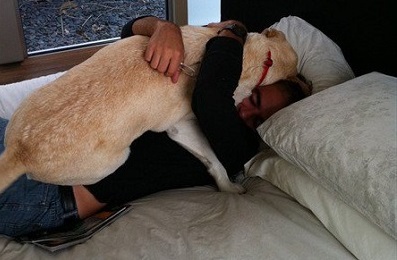 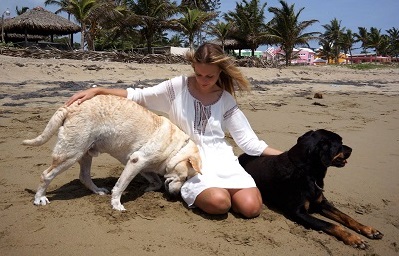 I recall taking Bagheera to the vet for her checkup. After the vet was done, he opened his kibble box, while she patiently sat and delicately ate them from his hand. When it was Harvard’s turn, the second he opened the kibble box Harvard jumped into it, inhaling pounds of kibbles as three orderlies and the vet tried to pull him out of the box.

At the barbeques I organized, he would always pray on the innocent. He once managed to eat over 30 hamburgers and 20 hotdogs. Needless to say, we had to get his stomach pumped and he barely made it. A few months later one of the guests left the kibble box closed, but unlocked, and we found him lying inside it, sleeping right in the middle of the evidence!

Moving to Cabarete agreed with him. While he missed running in the snow, he clearly loved the water and spent his days in both the ocean and the pool when not chasing Frisbees. 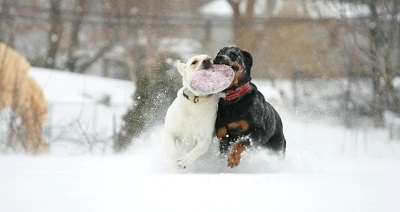 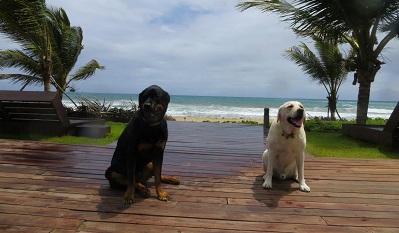 Obviously, his devious attempts to steal food continued and he learned to avoid our wrath by doing his extra-curricular eating out of sight. I remember Otilia seeing him discreetly walking out of the room with his head inclined in a funny way. He had opened the fridge. After perusing the contents and realizing we would not let him eat in peace, he expertly took a cereal bowl in his mouth while trying to make a discreet run for it. We managed to intercept his escape attempt this time and even imposed a semblance of a diet on him.

That’s not to say he stopped stealing food. With him, it was never really an option as everything agreed with his palate. Of late, he adjusted his diet to his new Caribbean environment. He had taken a particular liking for coconuts, which he would open and expertly strip clean.

I suppose it should not come as a surprise that his untimely demise came from something he ate. He had been so healthy and robust, surviving all his previous attempts to eat himself to death, that it was inconceivable that it would be any different this time. As usual I showered him with love and liquids to help him get through it, but this time it was not enough and his liver and kidneys failed him, and on Saturday he left me forever.

He’s been a fixture of Bagheera and my life for the past nine and a half years and it’s hard to imagine waking up every morning without his silky ears and scrunchy nose. As much as he loved food, he loved us even more, and leaves a huge hole in our hearts. It’s so hard to conceive that he’s no longer alive. Just 10 days ago he was healthy and happy, though a bit peeved that I thwarted his attempts to steal the pig we roasted for my 40th birthday.

This is ever the reminder about the fragility of life and our need to make the most of the present. But frankly I don’t care for the life lesson, it just sucks and I miss him terribly. That said he did have a fun and glorious life and I hope that he finds himself in doggie heaven around unlimited amounts of food for him to eat without ever being sick.

Harvard, Bagheera and I love you and miss you. Thanks for a decade of unconditional love!