The story of the Smoot-Hawley Tariffs should be a cautionary tale to present-day policymakers. The tariffs did not cause the Great Depression, but they deepened its severity and duration. All of the economists of the time opposed the measure, to no avail. As the House and Senate debated the bill, they barely considered the potential response from other countries. The tariffs were passed, leading to global retaliation. Global trade plunged from $5.3 billion in January 1929 to $1.8 billion in June 1933.

In difficult times, despite the lessons from the past, politicians always find it tempting to prop up domestic jobs and incomes with export subsidies, import tariffs, and cheaper currencies. In today’s globalized economy with far-flung supply chains and just-in-time delivery, it would take much less than the Smoot-Hawley Tariffs to disrupt trade.

In November the leaders of the G20 group of big, rich and emerging economies promised to eschew any new trade barriers for a year. Within days, Russia and India raised tariffs on cars and steel respectively. It has actually been surprising how few direct protectionist calls there have been so far in the US even though tariffs are currently low enough that on average they could triple without breaking WTO rules. It may be that to avoid appearing protectionist, politicians won’t increase tariffs but will resort to other means. Global competitive industrial bailouts are currently the main source of concern.

Unfortunately, large bank bailouts are unavoidable as businesses and consumers need credit to function. While the economy cannot operate without an effective banking system, the same cannot be said of other commercial institutions, be they in services or manufacturing.

There have been mostly calls to bail out companies in manufacturing, but the distinction between services and manufacturing is largely artificial. Designers, analysts, the sales force, and financial support staff at Rolls Royce, an aero-engine maker in “manufacturing”, do the same jobs as their counterparts at ARM, which designs, sells, and markets its processors, but is in “services” because other people make its processors. The distinction owes more to government statisticians than anything else.

Regardless, a bailout is a discriminatory subsidy. It’s very possible that bailouts in one country will lead to bailouts in other countries. As during the Smoot-Hawley Tariff discussions in Congress, the global response to bailouts such as the one for the Detroit automakers has not been considered. Nicolas Sarkozy has already said that Europe would become an “industrial wasteland” if it does not follow the US’s lead in propping up manufacturers.

A global misallocation of capital, throwing good money after bad through bailouts and thus by definition under-allocating capital to promising companies, would deepen and lengthen the severity of the current downturn much as the Smoot-Hawley Tariffs did during the Great Depression.

On the bright side, the current administration seems pragmatic and I am still hopeful that the bailouts will be limited and that politicians will have the courage to let failed companies die.

The art of balancing on a wire, walking the tenuous line that strains itself over failure and its abyss, is the perfect metaphor for Philip Petit on the path to his lifelong ambition: a walk between the highest points of the twin towers. Anyone who has dreamt of a goal as unthinkable as Petit’s will recognize his passion and his fear and the never-ending frustrations that ever threaten to leave the dream unrealized.

The re-enactment of the entry into the twin towers, under changing guises and improvisations, first to learn about the layout and then to carry out the plan, at times relying on luck alone to distract the guards, at others depending on brute strength to save the equipment, contains the intrigue of a thriller through the painfully real struggle between chance and preparation.

As for the interviews, which always run the risk of being dry in documentaries, Petit, his ex-girlfriend, and the friends who helped him walk the sky, all have that wonder and vibrancy which still feels like the excitement of youth on the threshold of personal history. Their personalities, along with the footage of practices that took place in the fields of France, the plans that were deliberated upon in cramped living rooms, and the first performances that were staged in the streets of Paris, then on top of the Notre Dame cathedral, and finally on the Sydney Harbor Bridge, lead to an understanding of the inherent beauty and artistry of the wire and the lives that are lived upon it.

It’s a testament to this documentary that the image of a man walking between the tops of the twin towers has, for a time, made them whole again.

I hate the fact that we are mortals. I also abhor the fact that we age and gradually lose our physical and mental abilities. Benjamin Button played on those fears as no movie ever has and made me sob throughout.

Death is a constant companion throughout the movie and the few moments of joy in the middle of the film were overshadowed by the ever-present specter of death and the dread of what was to come. As such, the film was extremely moving. It’s also extremely well done and the reverse aging of Brad Pitt was impressive.

However, the movie was disappointing as well. I expected the story to touch more on the typical Fitzgerald theme of being a stranger in a strange land, but the movie limited itself to its focus on reverse aging. The characters are also one-dimensional: Benjamin’s mother is only “the mother”, Benjamin is only “the guy who ages in reverse”, etc. Only Cate Blanchett’s character is a bit more developed.

The movie is worth seeing, but it’s not as good as most critics suggest and the Oscar buzz is undeserved.

As I had expected, 2008 was a year of consolidation. OLX continued to grow slowly but surely – we now have 115 employees and are present in 80 countries in 39 languages. I traveled far and wide for OLX and hope there will be less business travel in 2009.

On the personal side, I was hampered by a meniscal tear in my left knee and a right shoulder injury, both sustained playing tennis, which put me into rehab and out of the gym, tennis courts and extreme travel for most of the year.

I did manage to go skiing in Snowbird/Alta and Whistler, race dune buggies in the Baja and kite board in Venezuela.

My fantastic girlfriend is also helping me continue work (painstakingly slowly) on my open mindedness, patience, humility and cleanliness (a pet peeve of hers).

I suspect 2009 will be another year of slow growth:

The Onion team is incredible! They definitely get the Apple “tone” right. I could definitely see Steve Jobs saying that “keyboards stand in the way of human progress“:) 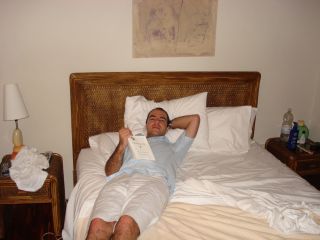 I was lured to Margarita and specifically the kite spot El Yaque by the kite boarding travel specialist Fun & Fly. It promised 360 days of wind out of 365.

Unfortunately the spot failed to deliver on its main promise. We were only able to kite 5 hours in the first 11 days. Fortunately, we were able to kite 5 hours on the 12th and final day. It rained every single day if only briefly. While the trip itself was inexpensive, food and local purchases were extremely expensive (above New York prices) as inflation increased many prices by 50-100% in the past year. The stay would also have been much more enjoyable if the room had hot water.

We intended to spend a few days in Los Roques or Tortuga as we had heard fantastic things about both locations but all the local flights were booked. We rented a boat and spent 2 days in Las Frailes, a small set of deserted islands near Margarita instead. The highlight of that trip came before we left as my cousin and I convinced our girlfriends we were going to sail the boat ourselves, share 1 small cabin for 4 people, eat the fish we caught which they would have to clean and prepare. Unfortunately the trip did not live up to expectations. There were no scuba tanks on board, contrarily to what we expected. There were no sand beaches on Las Frailes to walk on. There were not that many fish and corals to observe and the sea was covered by small jelly fish. Moreover, the boat rental was outrageously expensive!

The trip back to New York was a disaster. Santa Barbara Airlines closed its check in early and we missed our 6 am flight. They could not find our reservation in the system despite our printed eticket confirmations and took over 2 hours to issue our boarding passes. We could not pay airport taxes by credit card and the money exchangers did not allow the withdrawal of enough money to pay the airport taxes. We missed our connection in Miami and were put on standby for the flight to New York on American. The flight we ended up getting on in Miami was delayed 5 hours and they lost my suitcase!

On the bright side security was much better than we expected and did not notice any petty crimes. We did hear to avoid Caracas at all cost and dutifully obeyed. Should you come bring cash as you get two times the amount of Bolivars on the black market than at the official rate (and credit card transactions are at the official rate). Never get money at an ATM. Not only would the rate be at the official rate, but they would steal your PIN and take all the money out of your account.

Despite all of our travails, I had a good time given the charming company, witty conversation and relaxing atmosphere. Twelve days of doing nothing were exactly what I needed.


That said, I would recommend avoiding Margarita and will probably not come back to Venezuela other than to visit Los Roques.

I truly loved Malcolm Gladwell’s latest book on exceptional people. He argues that the largest reason those people succeeded is not because of their specific character traits but because they successfully combine hard work (specifically 10,000 hours of deliberate practice) with the many hidden advantages, extraordinary opportunities and cultural legacies provided to them.

The conclusion will not come as a surprise to most of the readers of this blog – Talent is Overrated, A Star is Made, A Star is Made – Part 2, Gladwell on Genius. However, the stories and anecdotes are so compelling, that they make the book extremely enjoyable. I am probably in the minority, but I loved the storytelling even more than in The Tipping Point (and much more than in Blink).