We are extraordinarily privileged to reside in a developed country at the beginning of the 21st century. We are living in the most prosperous and peaceful time in the history of humanity. In 1800 no country had a life expectancy over 40. Today it’s over 80 in many developed countries. In 1820, 94% of the world’s population lived in extreme poverty. Today less than 10% of people do at a global level even though world population went from 1 billion to 7 billion! In 1800, we worked over 70 hours per week to survive. Today we work less than 40 hours per week with a quality of life that would be the envy of emperors 200 years ago.

We communicate instantaneously and often for free globally. We can travel from one end of the world to the other within a day. We expect our jobs to be meaningful and not just a means of survival.

Technology is the reason for this progress. Its magic is that it is deflationary. By making things affordable, it increases people’s quality of life. When I was a kid only the rich took planes, or owned cars or cell phones. Today they are accessible to almost everyone.

This is not to say that “everything is for the best in the best of worlds.” Social mobility is stagnating. Equality of opportunity decreased in many countries. We have not helped the losers of globalization and the technology revolution. We have not addressed the ecological and climate consequences of our presence on this planet. The way we treat livestock is inhumane.

However, we have the means to address the challenges we are facing. We are at the very beginning of the technology revolution. Entire sectors of the economy which account for most economic activity have not yet been disrupted.

In food production, it takes 12 calories of feed to create 1 calorie of cow meat. To address this issue Memphis Meats creates synthetic meat from animal cells without the need to raise, feed and slaughter animals, reducing greenhouse gas emissions and land and water use by 90%. Alternatively, Impossible Foods creates plant based meat with similar benefits. I ate their burgers and could not tell the difference with real ones!

In the restaurant business, we are the very beginning of robotization. Zume Pizza, in which I am an investor, uses trucks with robots to prepare and cook pizzas on the way to your place after you order them from their mobile app. This allows them to be cheaper, given that they don’t have physical locations or personnel, and to be delivered faster while actually tasting better because the pizza arrives warm freshly out of the oven and they can afford to use higher quality ingredients. Likewise, Eatsa is revolutionizing salad bars by automating ordering allowing them to offer healthy, high quality food for less.

Countries like Estonia are showing how we can digitize public services. More than 30% of people voted online in the parliamentary elections of 2015. 93% of Estonians pay their taxes online. They can incorporate a company online in minutes. Parents can check their kids’ homework, grades and attendance records online. All medical records are online.

By the way, I don’t worry about the employment consequences of this robotization and automation. If I had told you in 1997 that in 2017 there would no longer be travel agents, bank tellers, that car production would be automated and that $500 billion of commerce had moved online, and I asked you to predict the unemployment rate in 2017, you would have guessed that it would have increased dramatically. It’s in fact lower today than it was then. We lack the capacity to imagine what the jobs of tomorrow will be, but there will be jobs. Let’s celebrate instead the disappearance of boring and mind-numbing jobs which are insults to human intelligence, while helping and retraining those who lose their jobs.

For the entrepreneurs and investors in the room, I would like to point out that most of the opportunities lie in the application of technology, rather than in technology creation itself. For instance, I suspect that narrow AI platforms will be commoditized and offered for free by companies like Facebook and Google. The application of AI is more interesting. For instance, if you are building a marketplace, your application could suggest a title, a description, a category and a price for the good that you are selling based only on a photo.

You can create a drone company in a few minutes. If you go to Shenzhen you can visit factories to pick the engine, remote control and propeller you want. This suggests that the category will be commoditized and that hardware manufacturing is not appealing especially since there are 2 dominant players: DJI and Parrot. Using drones to address problems is once again more interesting. For instance, a company like Betterview uses drones to fly over buildings and inform insurance companies of those that need maintenance.

Self-driving cars are going to be prevalent quicker than most suspect. We can precisely project the decrease in the cost of sensors and GPUs necessary for level 5 autonomy. We can therefore project when it will be economically viable to use a self-driving car, rather than a traditional one.

The first order effects of self-driving cars are obvious. Every year humans have 50 million car accidents killing 1.2 million people. This will end, which is fantastic. What is more interesting are second order effects. What happens when the marginal cost of a mile essentially goes to $0? This has profound implications because, for example, today you would not order a coffee on Postmates because the delivery cost would be greater than the cost of the coffee. But if a drone or autonomous vehicle delivered a drink to your place in 5 minutes, for free, you might not have a fridge or a coffee machine at home. You might not have a kitchen in your place given how expensive real estate is and that you don’t really know how to cook. As a result, restaurants might be designed with larger kitchens to deal with increased delivery demands.

These second order effects are profound and transformational. It’s what we need to reflect on to predict where technology is heading and where opportunities lie.

The good news is that extraordinary progress is being made in robotics, 3D printing, the Internet of Things, micro-satellites, solar and much more. As entrepreneurs and investors, we are truly blessed to have the privilege of helping to bring about this better world of tomorrow, a world of equality of opportunity and of plenty. “Whatever you think or dream you can, begin it. Boldness has magic, power and genius in it.” 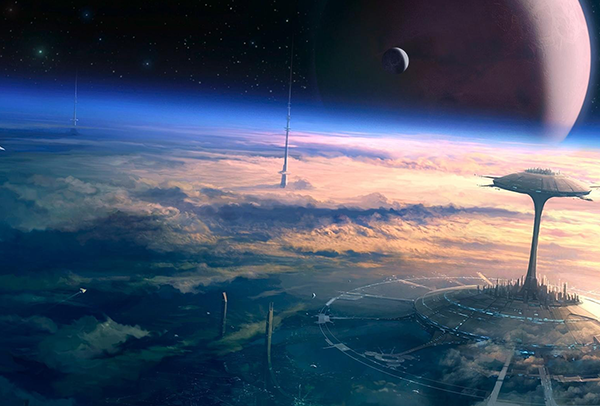